The goal of the REDA grant program is to attract new catalytic development projects that will bring transformative change and modernization to commercial corridors in Tamarac. The City is pleased to offer this grant opportunity for public-private partnership to invest in major projects that will result in transformative change. Further, the City is committed to expedited approvals for grant recipient projects.

Learn more about this program

The overall goal of this program is to incentivize plaza property owners to undertake significant, transformative and comprehensive exterior plaza renovations to improve the overall appearance and modernization of retail plaza properties.  Only comprehensive renovation projects will be considered.  This is a competitive (funds are limited) and discretionary grant program whereby the City will utilize grant funds for the most impactful, transformative projects.

Learn more about this program

The City of Tamarac is designated as a Building Permit Platinum City and taken extra steps to help ensure businesses have a first-rate experience when going through the development review/permitting process. Tamarac has adopted a streamlined permitting process with an online permit tracking system. The City of Tamarac and Broward County have teamed up to launch ePermitsOneStop, a centralized website that allows developers to submit their application and have plans reviewed online for permits, licenses and approvals in a quicker, more streamlined process.

The City of Tamarac has an updated hybrid Form-Based Land Development Code to incentivize the right development in the right place, and the City has also collapsed all its Flex Zones into one pool with over 1,500 multi-family/residential Flex Units available Citywide to be allocated to our targeted redevelopment areas to encourage and promote redevelopment. Utilized as a redevelopment incentive, flex units provide developers with more certainty and predictability in the entitlement process and saves time and money with a shorter review process and less fees.

Opportunity Zones are census tracts designated by the federal government, where investments receive preferential tax treatment under the Tax Cuts and Jobs Act of 2017. The goal is to spur economic development and job creation in these areas by providing tax incentives.

Tamarac’s role in the Opportunity Zones program is to connect Qualified Opportunity Fund funding with eligible projects. The City aims to foster commercial investment and development, as well as promote inclusive and equitable growth for existing businesses and residents while at the same time creating a means for protecting them from displacement.

Where are the Opportunity Zones in Tamarac? 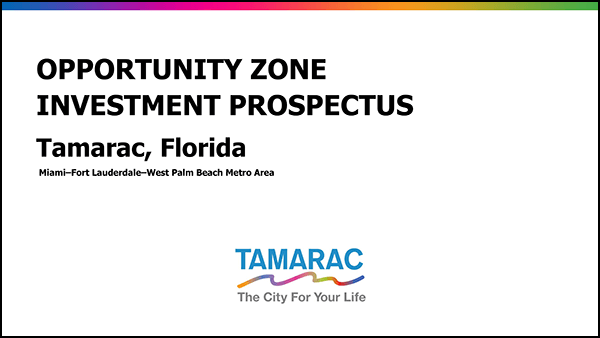 Click the image above to view the Opportunity Zone PowerPoint.

Congress created the federal New Markets Tax Credits (NMTC) program in 2000 to incentivize investments that create jobs and provide services in economically disadvantaged areas. Since 2000, the CDFI Fund, a division of the US Treasury that administers the program, has made 836 awards, allocating $40 billion in NMTC allocation, to CDFI-certified Community Development Entities (CDEs). In order to use NMTCs, a project must obtain financing from a CDE that has been awarded tax credits.

The program is primarily used to fund commercial, industrial, community facility and mixed-use real estate projects, as well as operating businesses located in qualifying Census tracts. NMTCs can also be layered with many different financing sources, such as traditional debt, grants and Historic Tax Credits.

The map below denotes the NMTC eligible areas in Tamarac. For more information, please contact Tamarac’s Economic Development Office at (954) 597-3513. 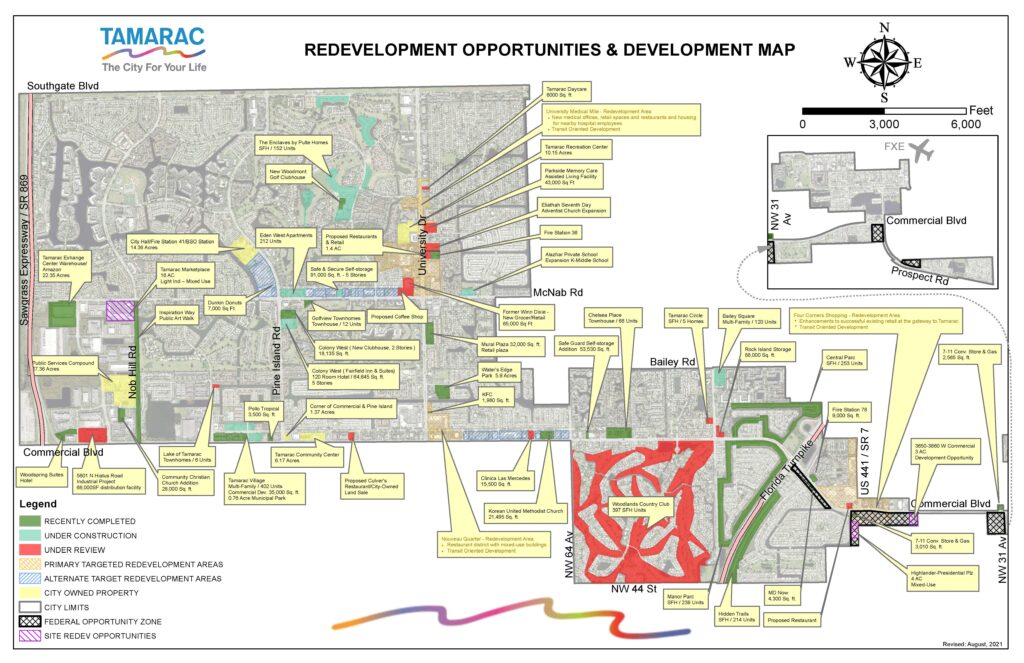